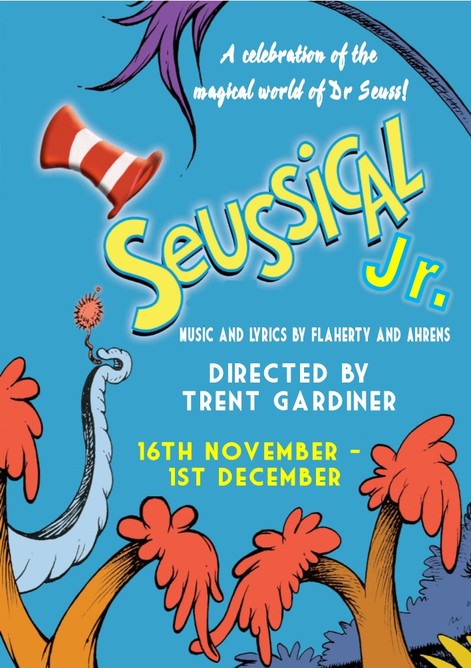 The story centres around Horton the Elephant, who finds himself faced with a double challenge–not only must he protect his tiny friend Jojo (and all the invisible Whos) from a world of naysayers and dangers, but he must guard an abandoned egg, left to his care by the irresponsible Mayzie La Bird. Although Horton faces ridicule, danger, kidnapping and a trial, the intrepid Gertrude McFuzz never loses faith in him, the only one who recognises “his kind and his powerful heart.” Ultimately, the powers of friendship, loyalty, family and community are challenged and emerge triumphant, in a story that makes you laugh and cry.

Rehearsals for Seussical Jr. will be held on Friday evenings from 6-9pm and Sunday afternoons from 1-5pm commencing Sunday 2nd September

For your audition, you will need to prepare the following:

Acting: Please learn a short piece (1 min only) from any Dr Seuss story to present at the audition.

Singing: You will need to prepare one musical theatre song (not from the show) that suits the character you are auditioning for. Please provide a backing track on iPod, iPad, CD or phone. (Not a cappella)

Auditions will be in 10 minute timeslots. Please bring a non-returnable headshot with you.

HORTON/THE ELEPHANT: Gentle, rotund and appealing. Think of him as a big-hearted blue collar guy who is steadfast and responsible and always tries to do the right thing for his friends. He is imaginative and receptive to the world around him. He is very un-selfconscious. Horton’s view of the world never changes–he believes in its goodness. But by the end of the show, without even realizing it, he is ready to become a parent.

THE CAT IN THE HAT: The essence of mischief, fun and imagination. The Cat stirs things up, causes trouble, but always sets things right again, helping JoJo to discover the power of his imagination as they create the story for the show together. He needs to play different comic ‘cameos’ (Dr. Dake, helicopter reporter, TV interviewer, auctioneer, Mr McGurkus, etc.) and be comfortable improvising with an audience.

GERTRUDE MCFUZZ: Very self-conscious and aware that her one-feather tail isn’t perfect. Gertrude changes during the show from a vain, neurotic, nervous and shy bird into one with the power to protect and care for a baby elephant bird and commit herself to Horton. In other words, she stops worrying about her looks and grows up.

JOJO/THE BOY: A “Thinker”–a smart child with a wild imagination. He can be played as being a little bit awkward, a little bit of a loner, or simply a rambunctious kid whose ‘Thinks’ get him into constant trouble. Lives on a speck of dust.

MAYZIE LA BIRD: Self-centered, selfish and vain, Mayzie will never admit to her own flaws. She manipulates anyone she can (especially Horton) into doing what she wants. But Mayzie isn’t all bad. In giving up her egg to Horton once and for all, she has a moment of generosity-she realizes she isn’t the kind of person who’d be a good parent, and she does the best thing she can do for the egg.

MR. AND MRS. MAYOR: Parents trying hard to raise a difficult child in a difficult world. They may get aggravated with Jojo, but they love him dearly and try to do the right thing, even if it turns out to be a mistake.

SOUR KANGAROO: She isn’t really sour at all. She’s just got a lot of attitude. She’s loud, brassy and a lot of fun.

THE BIRD GIRLS: They are like the popular girls in any school–a clique of pretty, self-centered “back up birds” who do whatever Mayzie does.

THE WICKERSHAM BROTHERS: These are not bad guys! They’re simply a lot like kids who tease, play pranks and get a kick out of making mischief, although often at others’ expense. They enjoy hanging around with one another, making music together on the street corner, and playing off one another.

ENSEMBLE/ CHORUS: Jungle Creatures and The Citizens of Who.

Click on the link below to book your audition time online