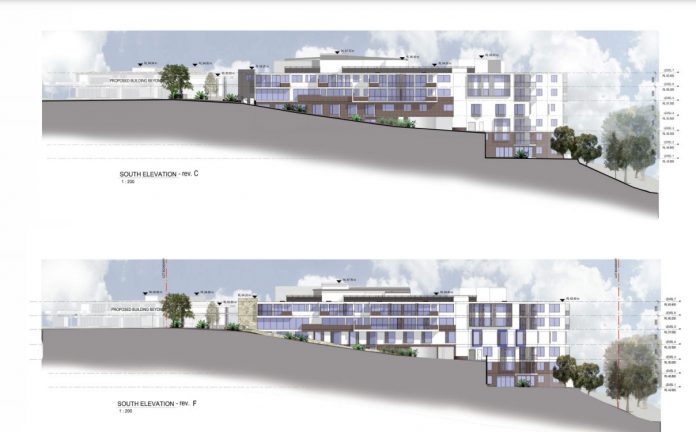 Lane Cove Council rezoned community land at 266 Longueville Road to enable it to be “sold off” to a developer for Senior Living Complex.

Residents want the area to be green space, and 266 Longueville Road could be converted into a playground, badly need Netball Courts or developed for other recreational purposes as it adjoins the Lane Cove Golf Club

The Lane Cove Council has entered into an Agreement for Lease with Australian Unity Limited in relation to the redevelopment of  266 Longueville Road Lane Cove.

The Lane Cove Council is the owner of the land, and the lease is a 99-year lease.

The development will comprise 82 one and two-bedroom independent living units, 70 aged care beds and 122 parking spots (for employees, residents and visitors).  To find out more, search DA117/2017.

The Lane Cove Council resolved to build senior’s living to assist with the need for aged care in Lane Cove.  Since this decision, there has been numerous aged care and retirement villages planned for Lane Cove.

On Northwood Road, opposite Jack and Co Pathways, just around the corner, will be building an aged care facility.

At the Lane Cove Council 16th August 2021 Meeting, the councillors discussed the NSW Housing SEPP Consultation.  The Officer’s Report set out in the Agenda Papers noted the following:

It is still considered that there should be a concentration threshold for the provision of age care development under the seniors SEPP, so that once a certain concentration of developments has been reached within a set area e.g. 2 square km, the SEPP should no longer apply. This is because the SEPP is sometimes used in order to access the concessions granted and areas can ultimately end up with an oversupply of seniors housing, placing demands on services and unintended, out-of-character built form outcomes.

The councillors discussed this issue in detail and decided the above threshold would be too hard to enforce.  During the debate, Council staff were asked for their opinion on the need for senior housing in Lane Cove in light of Lane Cove’s social plan.  The council officer stated:

“not delivered much for aged care concept.”

If this is the case, why is Lane Cove Council backing a plan that has substantially more “Over 55 units (actively marketing to active seniors who drive) than aged care beds?

As you will see from below, this site has a long and complex history.  In 2013, independent commissioner Eric Armstrong held a public hearing in relation to the planning proposal intended to reclassify land from community to operational.  The commissioner raised concerns and asked for further information.  The report included the following statement on the suitablitliy of the area to be used entirely for senior’s living.

Why does this risk no longer exist?

One of the issues is the development’s driveway location.  The RMS has recommended that the driveway be located near 268 Longueville Road (which is close to the famous Diddy intersection, which is currently being upgraded for safety reasons).  The RMS require that all access to the driveway is be left turn in and left turn out.  The Diddy intersection will have a right-hand arrow for drivers to turn right into River Road West.

Plans have been drawn up to construct a roundabout at the Northwood Road/River Road – this, in theory, could mean people may use it after exiting the new development – but does not assist for traffic heading to the development from North Sydney/Greenwich.

Anyone who has driven along Austin Street and Alpha Road at school drop off and pick up time will know that these streets become one lane.  Delivery trucks, staff, emergency vehicles and visitors will need to navigate the congested streets.

Mr Steve Conlon,  the previous St Michaels principal, submitted an objection based on the safety of his students.  All St Michaels parents should be concerned about the traffic being forced by the school (Alpha Road) and should speak at the planning panel.

Relevant documents are available for you to review on the Planning Panels website https://www.planningportal.nsw.gov.au/planning-panel/seniors-housing-development-3.

The Planning Panel will be meeting at 5 pm on 1st September 2021.

The purpose of the meeting is to give interested people the opportunity to speak directly to the panel before a decision is made.  If you wish to present to the panel, you must register to speak by contacting the Planning Panels Secretariat before 4 pm Monday30 August 2021 on 02 8217 2060 or via email to [email protected]

If you have any questions, please contact the Planning Panels Secretariat on 02 8217 2060. 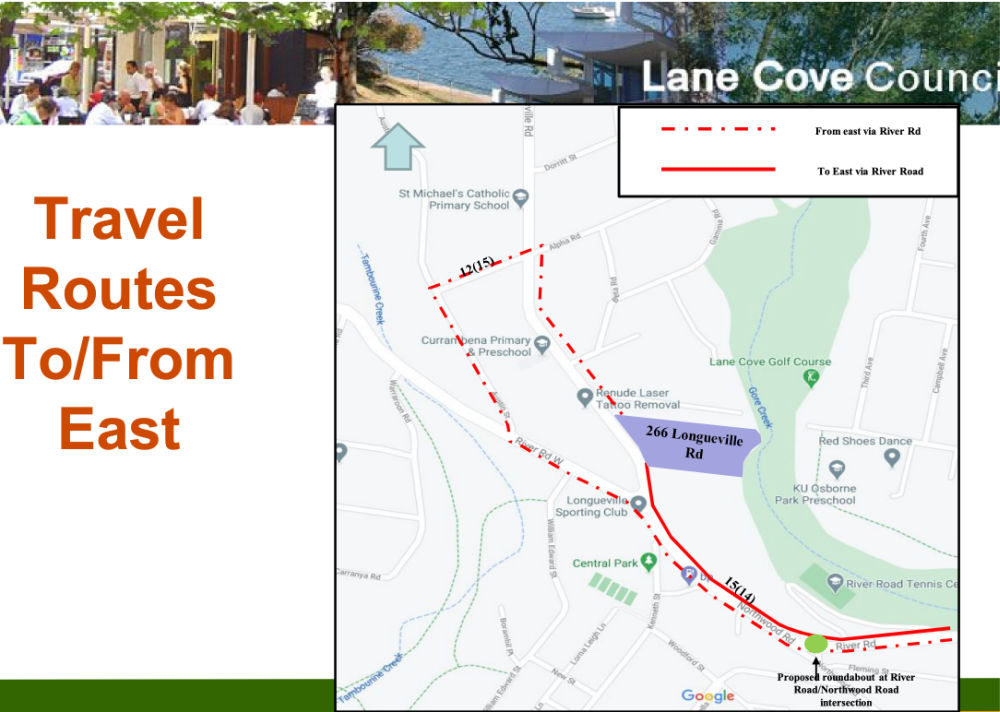 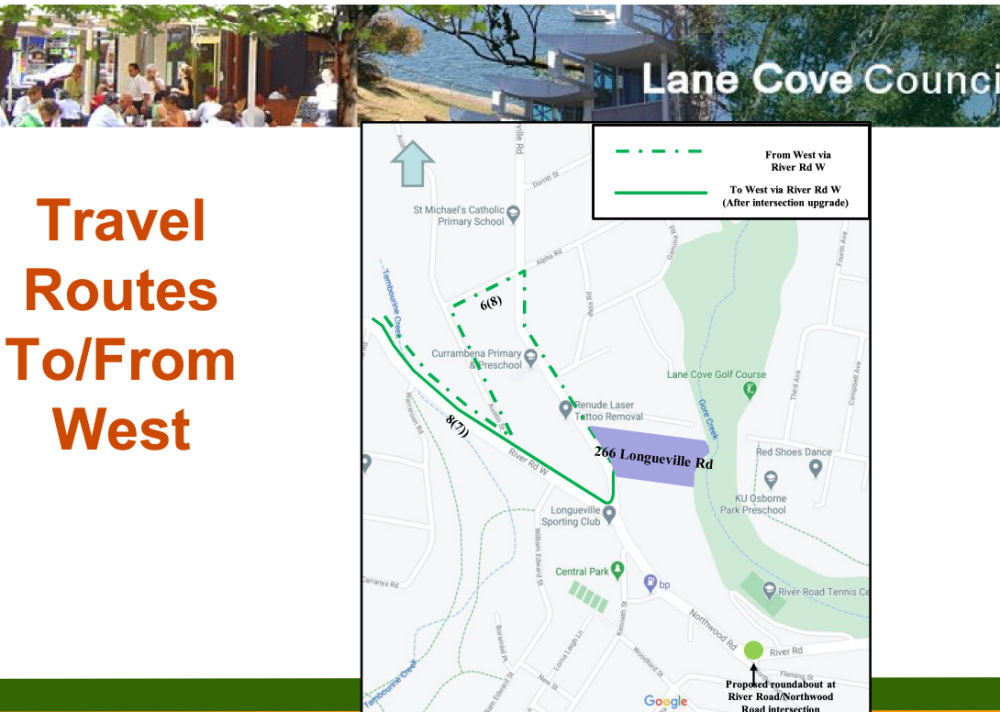 Since before the land was rezoned, local residents have been concerned about the traffic issues that will arise due to this development.

The Sydney North Planning Panel (SNPP) is hearing this matter on 1 September 2021.  The last time residents were able to voice their objections to this development was back in 2018.  They have now been given a very short period of time in the middle of a global pandemic to review this matter and prepare submissions.   This is a denial of due process, and the SNPP has issued incorrect notices and breached privacy rules.

Lane Cove Council resolved to support a planning proposal for 266 Longueville Road to enable the rezoning of land from RE1 Public Recreation to R4 High-Density Residential and reclassify the land from community to operational land.

266 Longueville Road used to be a bowling green and also used to house the Lane Cove Cultural and Music Centre.  Lane Cove Council recently demolished this centre as it contains asbestos.  During the demolition, Worksafe was called to the site by concerned neighbours.

Lane Cove Council contractors failed to specify the date that they were removing the asbestos and demolishing the building (which was constructed during the lead paint era). Their contractors did not provide any guidance on how neighbours could protect themselves from dust particles.  Lane Cove Council refused to assist neighbours to clean up their balconies, and one resident was so upset they moved out during demolition.   ITC understands that Worksafe sent a letter to the council setting out their concerns.

The planning proposal was publicly exhibited.

An independent commissioner held a public hearing as the planning proposal intended to reclassify land from community to operational.  The commissioner raised concerns and asked for further information.

Lane Council resolved to support the planning proposal. The North Shore Times reported that children stayed up past their bedtime to plead with the Lane Cove Council not to rezone the green space they used for sport and a park.

The North Shore Times further reported that it was a heated debate about the rezoning, and Councillor Scott Bennison told two female councillors to man up.  The North Shore Times quoted the then-Mayor David Brookes Horn as saying the incident was regrettable.  You can read the article here.

The Lane Cove Local Environmental Plan (LEP) 2009 (Amendment No.17) was notified on the NSW Legislation website.

NSW Planning received an application for a Site Compatibility Statement (SCC) prepared by GSA on behalf of Australian Unity Limited for 266 Longueville Road Lane Cove. The SCC was for a 70-bed residential aged care facility, 93 self-contained dwellings for seniors, residents’ support facilities, and basement car parking for 148 vehicles.  You cannot lodge a DA without an SCC.

NSW Planning issues an SCC for 266 Longueville Road for a residential aged care facility comprising of 70 beds, and 90 independent dwellings were submitted to Lane Cove Council.

The Development Application is lodged by Australian Unity, and the DA publicly displayed, and 186 submissions received.

A development application is then lodged with the Sydney North Planning Panel (SNPP) as the consent authority. The Sydney North Planning Panel reviews the DA as an independent body.  The Lane Cove Council is the owner of the land and cannot be the body responsible for assessing the DA.  The Lane Cove Council planning department’s role is to collate all the objections and provide all information to assist the SNPP in making a decision.

ITC writes to Mayor Pam Palmer and sets out concerns about documents not being uploaded to the DA portal in a timely manner for residents to review. Some residents had lodged their objections after an important letter from the RMS was received.  The RMS letter was dated 1 November 2017 and not uploaded until 22 November 2017.  ITC lists 5 documents that have not been uploaded quickly or, if uploaded, were not marked to be displayed.

The SNPP defers the development application for additional information, which included the following recommendations:

Australian Unity is given until 24 August 2018 to submit this information.

The SNPP extend the timeframe for the submission of additional information until 29 March 2019.

Extract of Minutes of Meeting of LCC March 2019

The General Manager read the recommendation of the Item considered in Closed Committee prior to Council’s consideration:

The SCC issued for 266 Longueville Road expires.   Australian Unity was responsible for adhering to deadlines, and their delay had resulted in the SCC expiring.

ITC writes to the Lane Cove Council and asks them to update their website to provide information on what is happening.  Residents are not aware of the SCC issues.  The Lane Cove Council responds, “Correct, but as the SCC is only a process matter given its replacing the existing, no update is required.”

As you will see from below, issuing an SCC is hardly a process matter.

The SNPP issued a second SCC for the subject site.

The SCC conditions note that height should be capped to RL 62.8, effectively requiring the deletion of the top two storeys.  Australian Unity did not like this condition.

During the  2020 COVID lockdown period, NSW Planning looked at all sites being reviewed by Planning to see which sites could be fast-tracked through the planning system to facilitate developments.  266 Longueville Road was not chosen to be fast-tracked. It was not shovel ready, and there were many outstanding issues.

However, the Pathways aged care development was fast-tracked.

The Lane Cove Council writes to the SNPP and states

“Council supports the amended proposal and raises no objections to the issue of an amended SCC, which should include the deletion of 1(a), 1 (b) and 1 (c) and any other amendment to facilitate the development as proposed.”

The new Executive Manager writes the letter of Planning (who previously worked at the Auburn City Council).

ITC wrote to Mayor Pam Palmer and asked her if the wording of the letter was a conflict of interest as the wording was consistent with the LCC being the owner of the land and not in its role as providing support to the SNRP.   Residents have also taken issue with several other statements in the letter and, in particular, the statements about views from Longueville Road and the Golf Course. 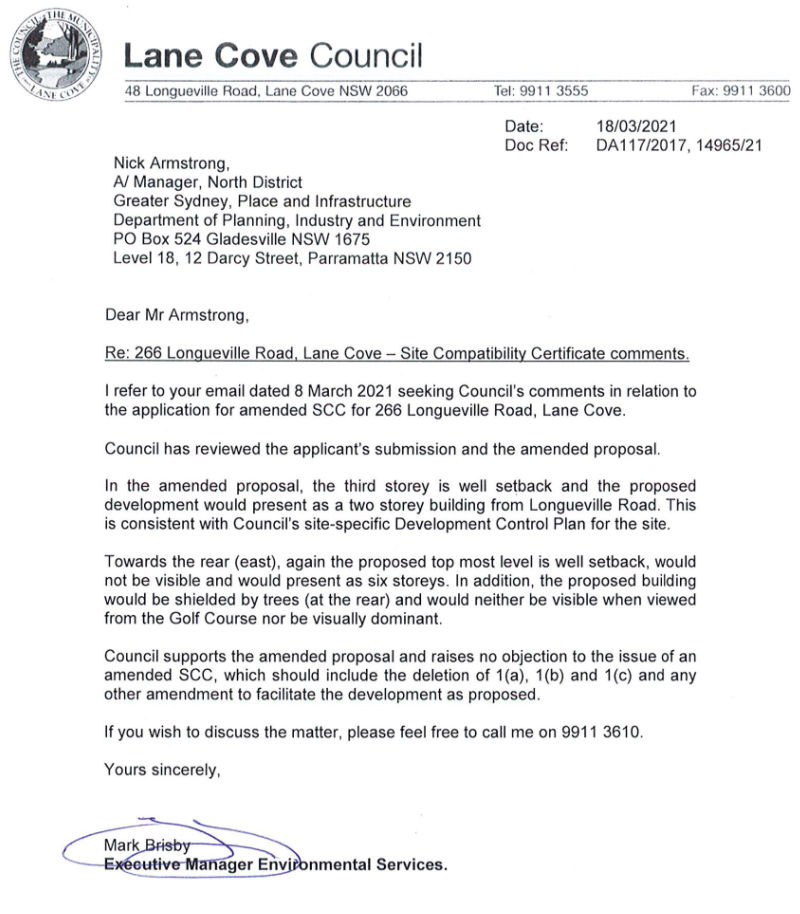 A third SCC is issued, and the second SCC with the condition on height and number of storeys is revoked.

The Sydney North Planning Panel will determine the matter at their public hearing on 1st September 2021.

Note:  ITC lives in Central Lane Cove and has submitted a personal submission to the SNPP.