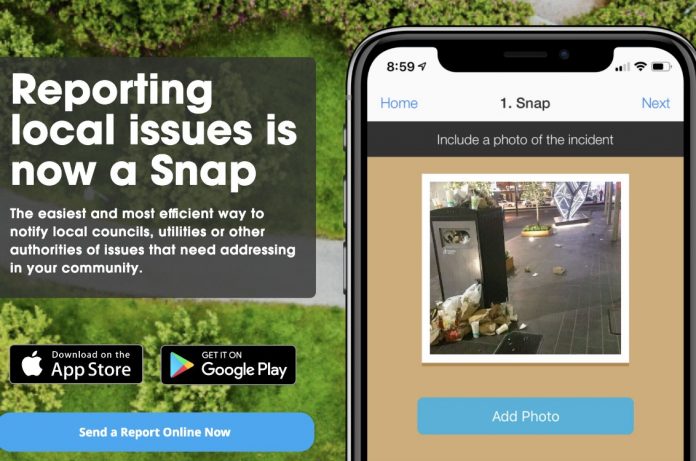 Avid readers of In the Cove will know that ITC is a big supporter of Snap Send Solve. Snap Send Solve is as simple to use as the name implies.  It’s a smartphone app allowing anyone located in Australia to report a local problem and have it automatically sent to the correct council or authority.  Over 500 councils and government bodies (in Australia and New Zealand) receive reports from Snap Send Solve.

Lane Cove Council receives reports from Snap Send Solve but this is all about to change.

Snap Send Solve was founded in 2011 by Melbourne-based IT expert Danny Gorog.

Mr Gorog developed the app after seeing a broken swing at a playground while he was on holidays with his children.  He wanted to report the issue but did not even know the name of the council responsible for the park or even the name of the street where the park was located.  He thought there had to be a better way.

Snap Send Solve lets users upload photos of fallen tree branches, road issues such as potholes, footpath tripping hazards, broken playground equipment, dumped rubbish, abandoned trolleys, water leaks and more with the incident being reported to the relevant authority within 3 minutes. Snap Send Solve can be accessed via an app on your phone or via your desktop.  Snap Send Solve has “geomapped the country” adding in all local councils so users can send reports via their smartphones using their phone’s GPS coordinates.

To fund Snap Send Solve the following “pricing structure” has been developed:

​The Snap Send Solve platform is configurable and able to be integrated with existing systems. It gives authorities the tools and options to communicate back to the user at a fraction of the price of developing a bespoke app reporting system.

Why would you then take a step backwards and stop using a reporting system that is used and liked by residents?

Reporting Issues Other than Via Snap Send Solve

Lane Cove Council wants to customise their Customer Relations Management database to deal with issues reported via the current contact methods (other than Snap Send Solve).

Here is just some of the feedback posted on ITC when we have discussed Snap Send Solve.

Julie – I was sceptical at first but this app really works! I reported an abandoned car in a train station commuter car park and 2 days later council have slapped an impoundment notice on it!

Katalin – Really useful! Had so many issues resolved thanks to it!

Elaine – My husband and I use it all the time – abandoned shopping trolleys, damaged street signs, leaking water mains – everything gets fixed. The app works well

Jenny – I’ve used it multiple times with fast results for graffiti, fallen trees, dead tree branches, uneven footpaths, abandoned trolleys, water leaks and I can’t remember what else. All with good results. I also tell lots of people about the app as I think it is great.

Anna – Yes, we love this app! After 3 years of a Telstra pit cover being broken out front our house, we used the app and within 5 days it was fixed. Also used it to report bins not collected on our street and they were collected the next morning.

This is what other local authorities have said about Snap Send Solve:

With the API Integration to our CRM some of our Council’s business units include the app as part of their toolbox to carry out their daily functions.

In addition, our customer service staff have seen a reduction in the number of calls coming through our call centres. It has also decreased the number of calls our staff need to make to clarify requests due to the detail captured automatically and through the attachment of photos.

There should be numerous ways a resident can report issues to Lane Cove Council.

Reporting options should include:

All of these reporting methods should be promoted by Lane Cove Council. However surely it would make sense to continue to use Snap Send Solve.  This is an app that provides the exact location of the issue, ensures the issue is a council related issue, has a photo where a council officer can make an on the spot triage decision and integrates with existing systems.

What do you think should Lane Cove Council pay the annual licence fee to ensure users continue to use Snap Send Solve in the most effective way?