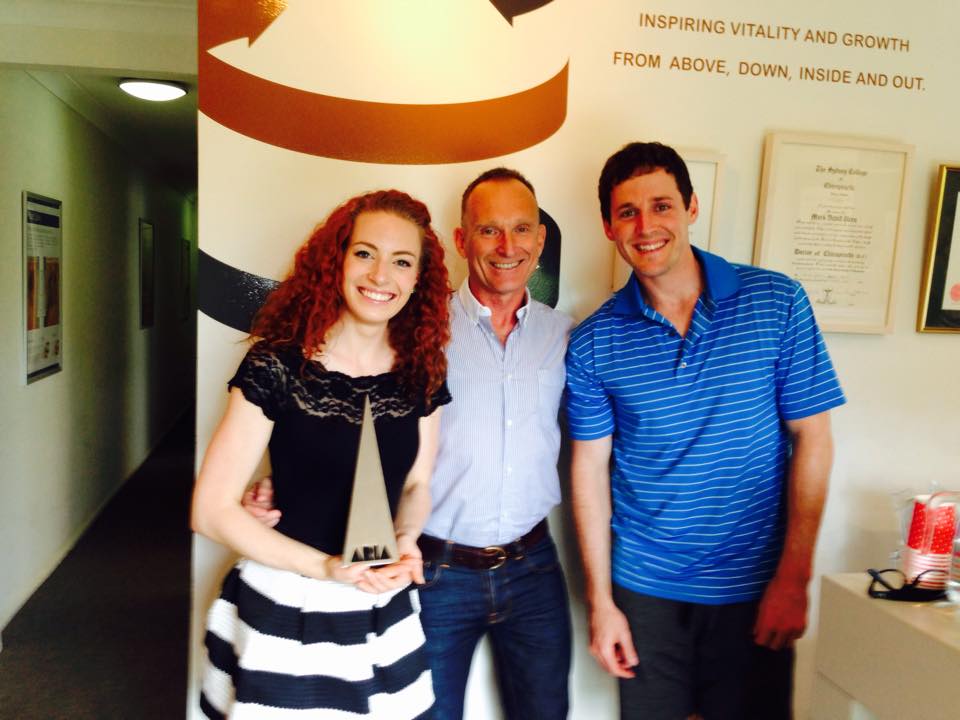 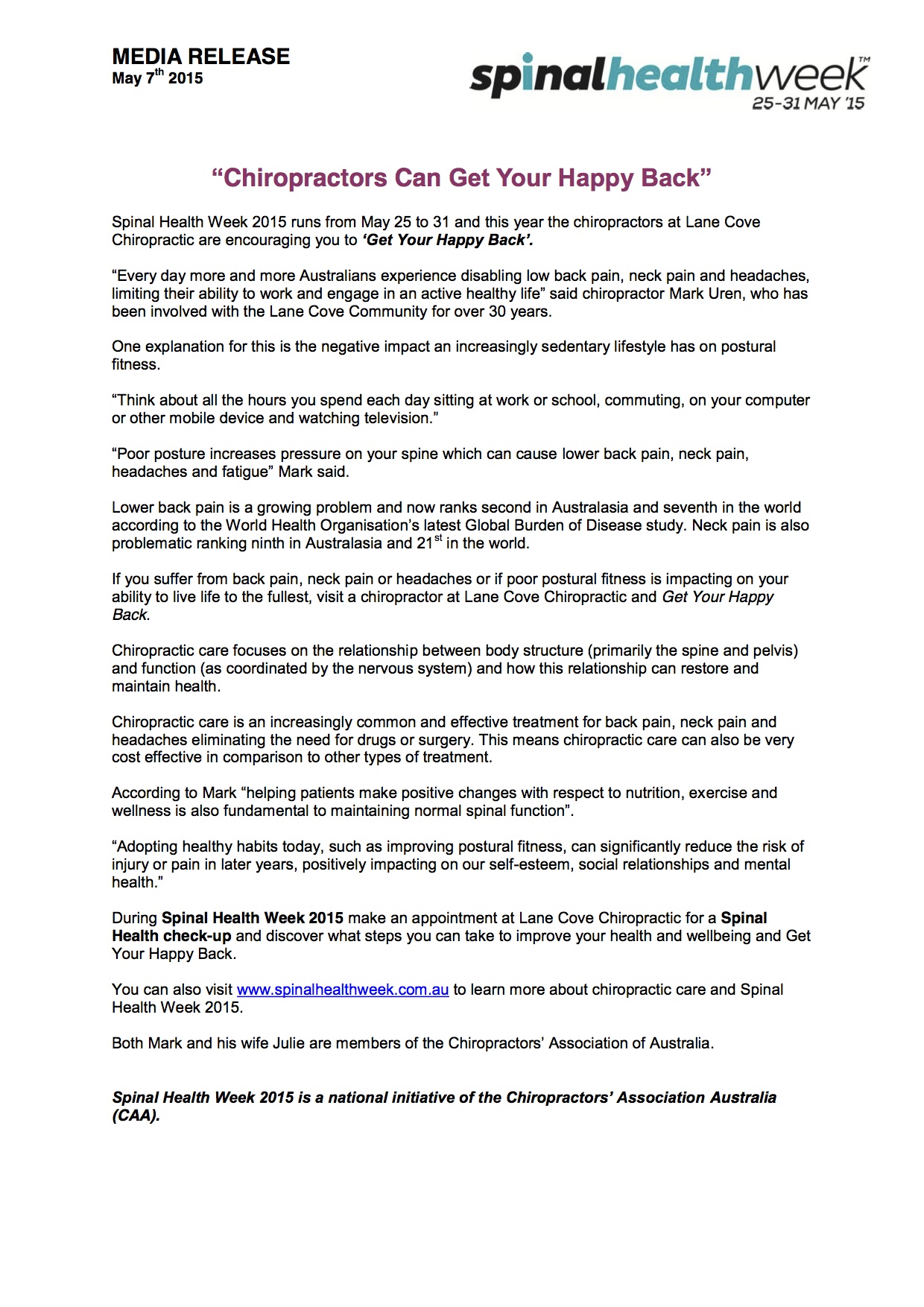 In the Cove is all about promoting locals and local businesses.  We love hearing success stories.

Today on the blog we would like to tell you about Lane Cove Chiropractic.  A Lane Cove business that started in the early 1970’s.

In 1981 Mark Uren started work taking X-rays and helping in the practice for Dr Ron Whittaker. Dr Whittaker originally started Lane Cove Chiropractic in the early 1970’s. He was a wonderful, caring and compassionate chiropractor and his practice was thriving and incredibly busy. Long term Lane Cove residents would still remember ‘Doc Whittaker’ and remember him fondly.

After Mark gained his chiropractic degree in 1983 Ron Whittaker asked him to work with him as an Associate Chiropractor. It was a fantastic opportunity and Mark learnt a great deal from him. About 3 years later, in 1986-87, Ron offered Mark the opportunity to buy the practice from him.

Mark really enjoys working in Lane Cove. He loves the community and the ‘village like’ feel of the place. In fact he loves it so much that he could not imagine being as happy working any place else. Mark jumped at the chance to be the Principal of Lane Cove Chiropractic Centre.  A few years later my wife Julie came on board to further strengthen the practice.

Besides Mark’s work at Lane Cove Chiropractic, he is currently on the board of the Australian Spinal Research Foundation, and is a former Director and Board member of the Chiropractor’s Association of Australia. Mark also regularly speaks at professional seminars and conferences around Australia.

That was 30 years ago and having been here all that time Mark has seen Lane Cove change. When Mark first started in the early 1980’s the population of Lane Cove was mainly older parents with older kids in their teens or older. Many of these people had grown up in Lane Cove themselves. Over the years the population of Lane Cove has become younger with many of the older families moving out and the younger families replacing them.

This is reflected in the people that Mark sees in his practice every day. If you were to visit  during one of Julie’s shifts you would have to step over kids’ toys and side step toddlers and prams.

Julie trained as a registered nurse going on to study midwifery and had been working as a midwife for many years while also spending time working with Mark as a chiropractic assistant.

It was there Julie witnessed the great changes chiropractic was having on people’s health and thus their lives. She embarked on 10 years of part – time study while our daughters were young.

Julie has now been a chiropractor for 9 years and though no longer a registered nurse/midwife those 20 years of experience have allowed her to work confidently with babies, children and pregnant women. Julie gets much joy providing chiropractic care to women throughout their pregnancy and then getting to meet their newborn babies.

For some reason we have always attracted a lot of patients from the arts and media – dancers and musicians and those in television and film. One reason, I think, is because in the 1970’s-80’s most of the major television networks were based around the area and when they needed help they came to see us, initially at least, because it was convenient and then when they got results they spread the word.

The arts and performance in Sydney and Australia is, I think, a relatively small and close knit community so 30 years on, we still see people from the arts and entertainment world.

Someone Mark will always remember is Don Lane. He truly was a larger than life individual (especially as Don was over 6 and a half feet tall) but also because what you saw on television was what you got in real life. Mark always knew when Don was due in because he would arrive early for his appointment and sit in the reception area of our practice and would hold a ‘tonight show’ asking all the other patients about their lives telling jokes and one time singing happy birthday to a bemused and delighted 3 year old.

I always had to schedule extra time for Don – but I never minded.

At the moment 2 of the current “Wiggles” are regular clients. Those two work so hard for their career. Mark always likens them to professional athletes, footballers or cricketers – such is the level of their physical training and dedication to their performance. Mark is in awe of what they go through to achieve excellence in their art. 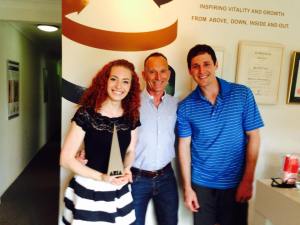 Chiropractic is a health care profession dedicated to restoring health and function to the spine. For Julie, Mark and our family – and their two daughters Mia and Hanna – chiropractic is more than sore necks, bad backs and headaches; it is a way of life.

Mark and Julie’s oldest daughter Mia is certified from the Institute of Integrative Nutrition and has a health blog called ‘Chia Mia’. Every second Friday Mia provides the office with a ‘Fresh Food Friday’ product. They are always sugar free, dairy free, wheat free and always yum!

Our staff consists of 4 chiropractic assistants, one of whom is a 5th year chiropractic student at Macquarie University. We have always employed students from the uni. It is a practical experience for them and offers a taste of what this profession is all about.

At its core chiropractic is about living a healthy and balanced life.   After all – if you eat poorly, don’t exercise or move your body regularly, if you don’t look after your mental and social well being – how can you have a healthy spine and body?  We would love to see you at Lane Cove Chiropractic.

This is a sponsored blog (to keep Mr ITC happy). ITC prides itself on only recommending services they would use or supporting start-up business and community events (which are always free to list on ITC). Thank you for supporting ITC.